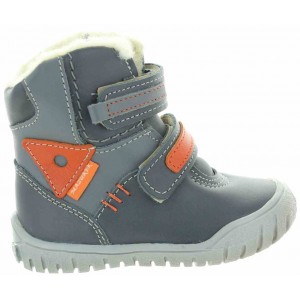 Children flat feet best winter boots.
Orthopedic arches are added to the soles of the boots
They are molded into the soles and contoured to child's foot.
Rubber soles never go flat thus when arch is added to the soles.
This is the technology from 1990 that was changed on all European made shoes
Before 1990 arches were added to the inside of the shoes but not anymore.
Leather is a soft material and when child wore those shoes arches diminished with time and disappeared
So Italians came up with improved soles and whole child shoe industry followed.
Those unique boots are made with gray with orange leather.
They are perfect for winter since they are waterproof
Those snow boots are lined with wool and waterproof lining so they will never soak any water.
Gray rubber sole with superior traction and snow.
Try them in deep snow - you will be amazed how well they perform.
Snow boot cannot not have to be heavy rubber one to be waterproof.
Local winter boots sold in USA are made out of heavy rubber in China.
Those are horrible for kids feet as they destroy their feet and turn their body gait.
Over time child becomes pronated and pigeon toed and parent does not realize that cause where those cheap winter boots.
Winter boots made in China out of heavy rubber are just too heavy for a child and over time deform their body gait. 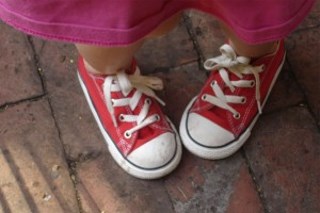 It is caused by heavy winter boots that shifts body and foot gait and their feet turn inwards.
When the boots is heavy it drags the foot inward and causes pigeon toes over time.
Snorel, Bugs, Columbia and even UGS are junk snow boots. UGS boots being not heavy but they will collapse kids ankles since they offer no ankle support of any kind.
Snow boots have to be light with good soles for traction. Ankle support with reinforced heel have to be present to prevent pigeon toe and inwards foot position when child is walking.

We never buy cheap winter boots for our children in Europe, only quality shoes. UGS are another example of cheap winter boots that causes child to deform their feet.
Those boots do not offer good ankle support, no orthopedic arch, no profiled soles and they are not measured for kids feet correctly. They are simply cheap boots made in China. Even the original UGS from Australia those that cost above $200 for a child are not suitable for kids either. Why? No orthopedic support of any kind. Those boots were never sold or offered in Europe since no one would buy them. The reason for that is kids shoes in Europe are regulated by Healthy Foot Mark. They are regulated by Ministry of Health that controls what type of shoes are sold in Europe. If they are not orthopedic they are not allowed for sale in any local stores. That is why in Europe we do not have any Chinese imports since they considered low quality shoes and they will destroy kids feet over time. So best thing is avoid them like a plague and invest in best shoes that will positively impact child's feet and posture. You will never see any child in Europe that is flat footed, pigeon toed, pronated or walks with deformed, collapsed ankles. Flat feet in children is only 5% genetic (either from parents of family genes) rest of orthopedic problems are caused by wearing cheap none orthopedic shoes with no support.